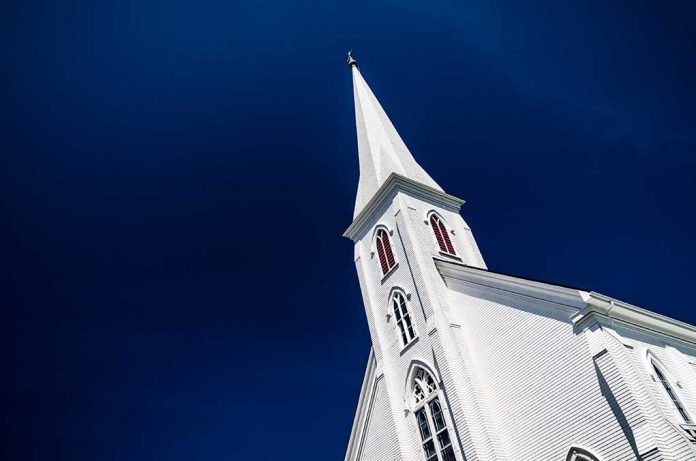 (RepublicanJournal.org) – The text of the First Amendment to the United States Constitution reads as follows:

“Congress shall make no law respecting an establishment of religion, or prohibiting the free exercise thereof; [sic] or abridging the freedom of speech, or of the press; [sic] or the right of the people peaceably to assemble, and to petition the Government for a redress of grievances.”

The first clause of the Bill of Rights deals with religion in America and has become one of the most contentious points in our society. The Founding Fathers elected to divide it into two segments and many of the court cases have surrounded Christianity, in particular.

The first part of the amendment was put in place to prevent the government from dictating all citizens must worship in a manner they decreed. The people who were deciding how the country would be governed did not intend for the institutions that were put in place for that purpose to be devoid of God.

Documents saved from that era show their thoughts on the issue and include:

John Adams. His words tell of his feelings about the nature of humans and their position as he said it “among the works of God.” And — he took note that liberty does not come from man.

Thomas Jefferson. In the 1786 Virginia Act for Religious Freedom, he wrote that it would be illegal to force anybody to practice a particular religion, but they would be free to speak out on it and it would not affect their ability to serve.

Thomas Paine. He expressed an opinion that said, “spiritual freedom is the root of political liberty.” He also said that a vigorous defense of both is the duty of those leading the nation.

The second clause of the constitutional protection of religion was put in to prevent the government from passing laws that would force a person or group to forgo the tenets of their faith. However, this is not totally free reign, there are limitations guided by protecting the public good.

For example, the Supreme Court of the United States (SCOTUS) ruled, in a 1944 case coming out of Massachusetts, that parents “could make martyrs out of themselves, but not out of their children,” when it came to handing out religious pamphlets in dangerous areas. The court also held in a case from Oregon that the state could withhold unemployment benefits of a person who was fired for using the hallucinogenic drug peyote even though it was during a religious ceremony.

Looking at the argument about the “freedom of religion” in the United States must come in two parts. Is the government establishing a religion? In other words, are they forcing people to follow a specific religious faction? Secondly, are they interfering with the person’s right to adhere to their own moral code (as long as it does not harm others)? If the answer to those questions is “yes” then there may be a constitutional issue.