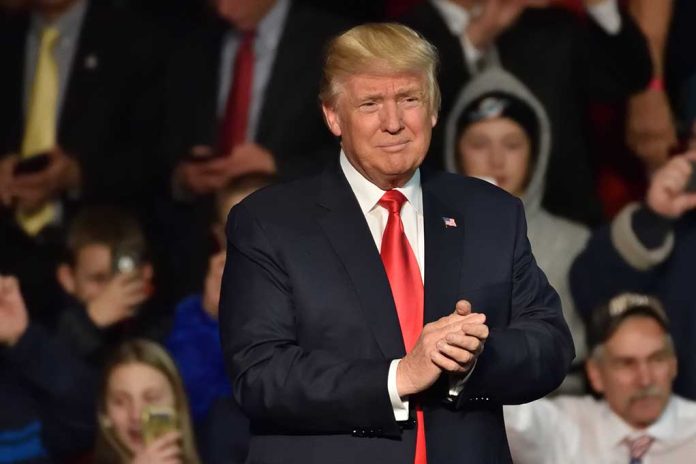 (RepublicanJournal.org) – Former President Trump hasn’t announced whether or not he plans to run in 2024, but many people expect he will. After the falling out the former commander in chief had with his then-vice president, Mike Pence, chances are if Trump makes another bid for the Oval Office, it won’t be with Pence by his side. Who might be the former president’s running mate in 2024? Representative Marjorie Taylor Greene (R-GA) is a good possibility.

Getting the Greene Light

During an interview with the Daily Beast, Robert Draper talked about his book “Weapons of Mass Delusion: When the Republican Party Lost its Mind,” which mentions Trump could be eyeing Greene to be his running mate. The author told the Daily Beast the former president had been discussing the move for a while, since at least February. Draper noted the congresswoman’s unwavering loyalty to Trump has been a motivating factor in the former president considering her to run with him.

Despite the many battles the former president has faced, Greene has supported him every step of the way. When the FBI decided to raid Mar-a-Lago, Trump’s Florida residency, the congresswoman called for defunding the bureau. During her time in Congress, Greene has called for Dr. Anthony Fauci to be fired from his position as the White House’s chief medical advisor. The congresswoman has also pushed for the impeachment of both President Biden and Merrick Garland, the US Attorney General. Many of Greene’s ideals align with Trump’s as well, a good recipe for two people potentially working together. Both Republicans have strict immigration policies in mind, with Trump wanting to build a border wall and Greene pushing for a four-year immigration hiatus.

Despite the political compatibility, there are some areas where the congresswoman and Trump would butt heads. One is abortion, which the former president has noted he supports. Meanwhile, Greene is staunchly against the procedure and likes the idea of a national ban with no exceptions. Trump has also broken away from Greene on matters surrounding gun reform and encouraging Americans to get inoculated against COVID-19.

Another bump in the road would stem from the fact the congresswoman is a Christian Nationalist, meaning she believes the US should be governed as a Christian nation. Ivanka Trump, the former president’s daughter, converted to Judaism to marry her husband, Jared Kushner, garnishing her father more respect and support from the Jewish community.

Greene’s road into politics and now potentially being a vice presidential candidate has been short but far from easy. The congresswoman lost all of her committee assignments in the House due to comments and remarks she made before being elected, such as her support for the QANON conspiracy theory and liking a post on Facebook declaring someone should shoot Speaker of the House Nancy Pelosi (D-CA).

Not long after the stripping of her committee duties, leaders of Greene’s own party criticized her for comparing mask mandates to the Holocaust. Since then, the congresswoman has become a major influence in the Republican party. Now, she’s looking at potentially being a vice president to Trump. Draper’s book mentions Greene’s declaration that she would be honored to run alongside the former president, although the author admitted she was the last candidate the Republican National Committee would want on the ticket.

Presidential candidates typically look to choose running mates who will offset some of their own weaknesses and appeal to a broader spectrum of voters. If Trump chose Greene to be on the ticket with him, such a factor would hardly be the case. Both Republicans share similar values and much of the same base. Instead, Trump choosing Greene to run with him would likely cause some friction with his critics. Perhaps that’s what he wants, even if the attention might not all be positive.