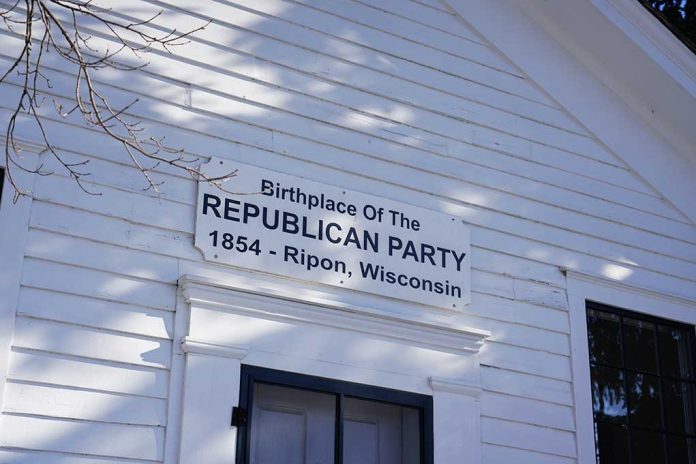 (RepublicanJournal.org) – US politics are built around a long-running and stable two-party system. However an election turns out, we know the president will be from one of those two parties. Our legislators mostly belong to one or the other with a few independents choosing caucus with one of them. The contest between Republicans and Democrats is central to our government, predictable, seemingly eternal. But it wasn’t always like that.

Slavery Becomes a Cause

That changed with the 1854 Kansas-Nebraska Act, which repealed the anti-slavery Missouri Compromise and allowed the extension of slavery to new US territories in the Midwest. The Whig Party, the second-largest party from the late 1830s to early 1850s, was officially neutral on slavery, while the bulk of the Democrats supported it. However, many individual Whigs were strongly abolitionist and opposed the Kansas-Nebraska Act.

Some Democrats in the northern states also opposed the Act, and many of them left to found the Free Soil Party. When internal Whig splits over the issue tore the party apart, the anti-slavery group, known as Conscience Whigs, started to cooperate with Free Soilers and other opponents of the Act.

The GOP Is Born

On March 20, 1854, around 30 people – a mix of Free Soilers, Conscience Whigs and anti-slavery Democrats – held a meeting at the schoolhouse in Ripon, WI. They decided to form a new political party to oppose slavery and uphold the ideals enshrined in the Declaration of Independence. The name of the new organization was to be the Republican Party.

In the 1854 midterm elections in the House of Representatives, the Democrats suffered serious losses, mostly to independents – but the new Republican Party gained 13 of the 234 seats. The Republicans argued for free markets, giving land in the west to farmers not plantation owners, and modernizing the growing nation. Their ideology was summed up as “Free Soil, Free Labor, Free Men.”

Early Republican support was concentrated in the Midwest and New England, with an outpost in St Louis, MO. However, as the Whigs continued to disintegrate – most northern Whigs had joined the Republicans by the late 1850s – the party soon became the main opposition to the Democrats everywhere outside the South. By 1860, it was the leading party nationally, holding the White House almost continuously until the end of the century.