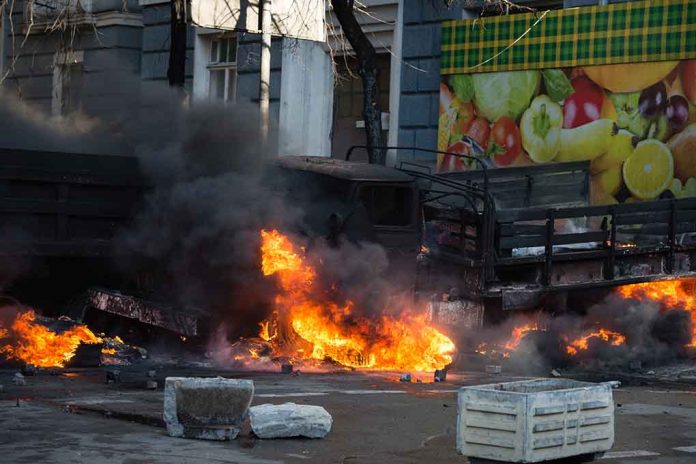 (RepublicanJournal.org) – Protests have erupted across Iran in response to the death of a 22-year-old by the name of Mahsa Amini. The young woman died resulting from head trauma she allegedly suffered while in the custody of Iran’s morality police. Now, the demonstrations have become more intense as protestors set fires across the nation’s capital.

Protesters set fires in the street in Tehran – as women in Turkey cut off their hair in protest | Daily Mail Onlinehttps://t.co/p5Wxwia3FD

Authorities arrested Amini for not adhering to Iran’s strict dress code, which has been in place since 1979 and demands every woman wear a hijab when in public. While in police custody the young woman suffered a blow to the head, which led to her hospitalization. She spent three days in a coma before she passed away. Iranian authorities deny they did any wrongdoing.

The uprisings originally began in a community in northern Kurdistan where Amini was from. They’ve since spread across major cities in Iran, such as the capital of Tehran, to around 50 areas nationwide. In several communities women have taken to the streets, burning their veils and cutting their hair to demonstrate their right to be in public without a headscarf.

As the unrest continues, protestors have battled with police and destroyed official vehicles. The revolts have turned fatal, leading to the deaths of many people including a police officer and a member of a pro-government militia.

The demonstrations have spread to other parts of the world as well. In Turkey, women have cut their hair outside of the Iranian Embassy. The opposition has also found its way to the US, where in New York Iranians have gathered outside a United Nations conference to disapprove of the country’s leader, President Ebrahim Raisi.