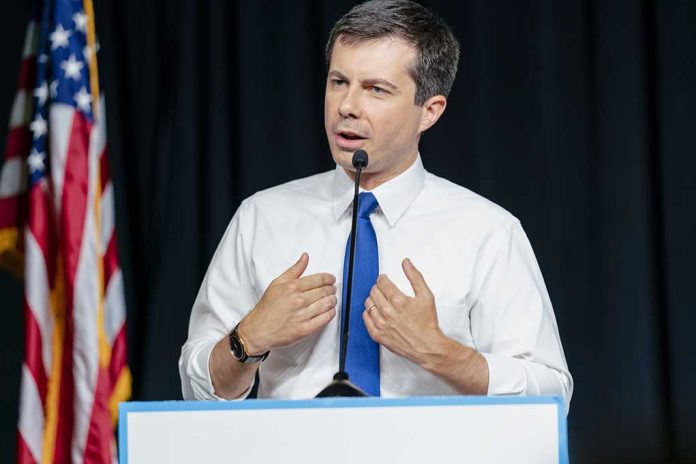 (RepublicanJournal.org) – Pete Buttigieg, once the Mayor of South Bend, Indiana, may have been able to make improvements to the city’s transportation system, but his time as the US Secretary of Transportation has been a different story. In just two short years, Buttigieg has dealt with several crises ranging from a supply chain issue in 2021 to the recent Southwest Airlines debacle. His crisis-riddled tenure has caused him to catch flak from Democrats and Republicans alike.

Southwest recently canceled a magnitude of flights, disrupting holiday travel plans for thousands of Americans. In response to the holiday chaos, Buttigieg declared the airlines needed to do whatever it took to get people where they were going. The secretary mentioned the airlines should cover the travelers’ expenses, adding that in the meantime, his department would continue to utilize all available tools to “hold them accountable.”

Southwest Airlines needs to do everything it takes to get stranded passengers to their destinations – and cover their expenses (like meals, hotel, ground transport) in the meantime. We’ll continue to hold them accountable with all tools available to USDOT. pic.twitter.com/YEq6uCMnvD

Senior fellow at the Institute on Race, Power, and Political Economy, Nina Turner expressed her dismay over the secretary’s failures. The left-wing activist declared the issues America faces with transportation is the result of Buttigieg attempting to make his resumé more attractive for a future presidential bid. Turner added the former South Bend Mayor is a “prime example of failing up.”

What’s happening with the railroads, airlines & the supply chain is a result of a small city mayor being made the Secretary of Transportation as a means to pad his resume for President.

Secretary Buttigeig is a prime example of failing up.

According to Fox News, Buttigieg has also faced criticism from lawmakers on the other side of the political aisle. Representative Troy Nehls (R-TX) declared the difference between stranded Americans and the Transportation Secretary is the fact Buttigieg flies around on private jets, avoiding delays and cancellations. The House Judiciary Committee GOP echoed similar criticisms of the failed presidential candidate, noting Buttigieg claims to be working on the ongoing airline issue but continues to spend taxpayer money to fly privately.

In 2021, America’s supply chain suffered due to the trucker shortage. Ships had to wait off the coast of California as congested railways and transportation delays caused a bottleneck in distribution. Buttigieg faced severe criticism for his handling of the shortage of household and manufacturing items as well as the resulting higher prices.

Even so, the Transportation Secretary shook off the negativity and attempted to spin the issue into a positive by claiming it was the result of Biden’s economic boom. Do you think he will try to spin this Southwest catastrophe?