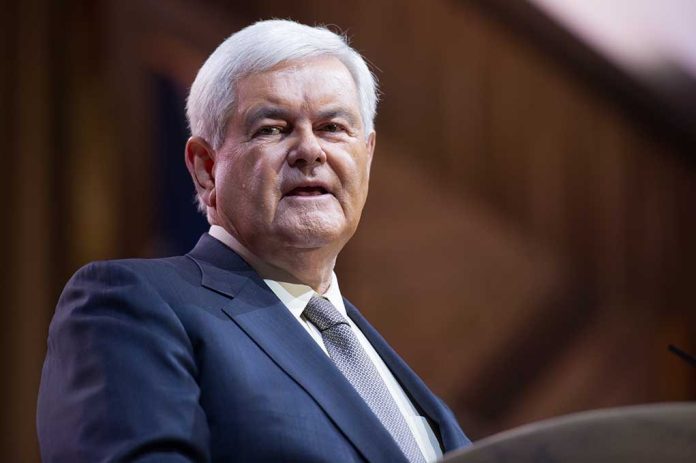 (RepublicanJournal.org) – Reporters surrounded former House Speaker Newt Gingrich during a recent visit to Capitol Hill, pelting him with questions about upcoming congressional hearings. As the current members prepare for another round of the January 6 Select Committee hearings, the mainstream press appear to want as much gossip as possible, and they don’t seem to care where they get it. Gingrich showed no interest in their drama, poking fun at one unsuspecting journalist who won’t soon forget it.

Fmr. Speaker Gingrich tells me, “I think you have a learning disability,” and points to his brain after I asked him what he thought of the Jan. 6 committee earlier today pic.twitter.com/NmCyayhqMJ

NBC Congressional Correspondent Scott Wong couldn’t seem to grasp what “I don’t talk about it” means, badgering the former speaker repeatedly. After several attempts by Wong and others to ask the same question with different phrasing, Gingrich finally shut the conversation down for good.

In the final exchange, Wong asked one more time what the former congressman thinks about the hearings before being told in no uncertain terms, “I think you have a learning disability.” The shocked reporter asked for clarification and got it. “Try the phrase,” he said, “I don’t talk about it.”

Newt Gingrich does not, as a matter of personal policy, discuss the January 6 hearings, and never has. The committee wants information from him about communications with former President Donald Trump and his staff, but there’s no indication of that being the reason for his visit. After being brushed off by the experienced elder statesman, the press walked away from the exchange empty-handed.