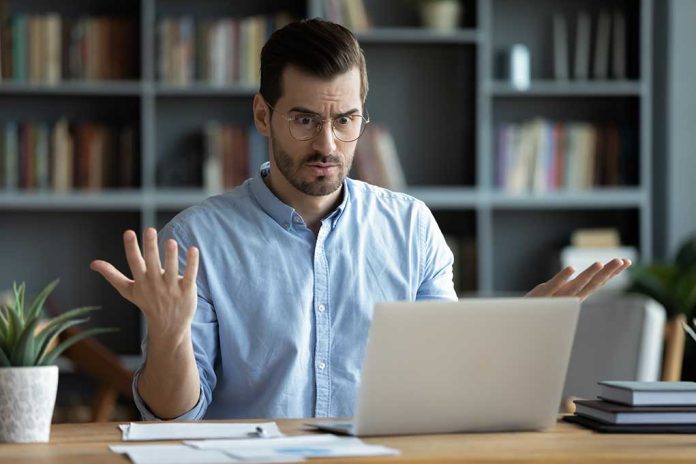 (RepublicanJournal.org) – A Hollywood actress has launched an astonishing Twitter attack on the US. Mira Sorvino, the star of Woody Allen’s 1995 comedy, “Mighty Aphrodite,” mentioned white supremacism, 18th century slavery, and even convicted rapist Harvey Weinstein in a rant that somehow ended up comparing America to the Third Reich.

‘1 Degree Away From Auschwitz’: Oscar Winner Loses It Over America’s ‘Hideous Wrongs’ https://t.co/NBFF4D0hpX

On December 31 Sorvino opened Twitter and sent a pair of tweets that, in two short paragraphs, made the over-the-top false comparison. Asking if anyone else felt “shellshocked” that the US’ “hideous wrongs” hadn’t been completely eradicated, the actress — who won an Academy Award for her role as a prostitute in Mighty Aphrodite — went on to claim we’re “only 1 degree” from the series of rapes and sexual assaults perpetrated by Weinstein, the “genocide” of Native Americans (who mostly died from the same diseases that killed many early settlers), George Washington’s “thousands of slaves” (whom historians think probably owned around 125 slaves) or, incredibly, the Auschwitz extermination camp, where an estimated four MILLION Jews and other enemies of the Third Reich were murdered.

Sorvino herself narrowly escaped becoming one of Weinstein’s victims. She says he propositioned her, and when she turned him down, he retaliated by harming her career. Director Peter Jackson says Weinstein barred her and another actress from being considered for parts in the “Lord of the Rings” movies. When Weinstein was convicted of rape in Los Angeles last December, she said, it was “triggering and re-traumatizing” for her to relive memories of the incident.

The US — like most countries — has episodes in its past that as a nation we should look back on as lessons on what not to do. Does that really merit a comparison with Hitler’s most notorious death camp? There are racists and sexual predators in every nation, but Auschwitz was an evil unique in its size and callousness. Sorvino is right to think we could do better, but many people might be thinking we’re already doing a lot better than she implied.