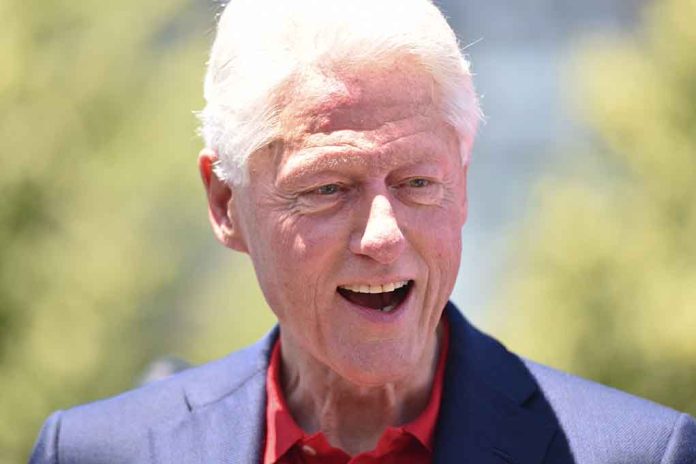 (RepublicanJournal.org) – Former President Bill Clinton has a history of meeting and traveling with convicted pedophile Jefferey Epstein and his associate Ghislaine Maxwell. The 42nd President recently visited Texas to campaign for fellow Democrats when a reporter asked him about the disgraced financier. Clinton’s response says it all.

In a video that has since gone viral, Juan Mendoza, a correspondent for Real America’s Voice, asked the former president about his relationship with Epstein. Clinton smirked as he claimed the “evidence is clear,” before walking away. The exchange took place on November 7, just one day before the midterm elections. By the next day, the video Mendoza posted on Twitter had more than 1.7 million views with over 6,000 retweets.

I confronted @BillClinton at the rally he held with @RepCuellar in Laredo about his alleged connections to child sex trafficker Jeffrey Epstein. “I think the answer is clear.” pic.twitter.com/ZtDR96PJwF

While the 42nd President has never been accused of being a part of Epstein’s criminal enterprise, his association with the deceased criminal has raised some eyebrows. During Clinton’s time as commander in chief, the pedophile visited the White House at least 17 times. The former president had also flown with Epstein on his private jet, the “Lolita Express.” Angel Ureña, spokesman for the 42nd President, noted in a 2019 statement that the former commander in chief did, in fact, fly on the plane. He also asserted Clinton never visited any of Epstein’s estates with the exception of an apartment in New York.

The statement also denied Bill Clinton had any knowledge of the millionaire’s illegal actions, but the former president’s response will likely only raise more questions than provide any answers. What do you think about Clinton’s response?